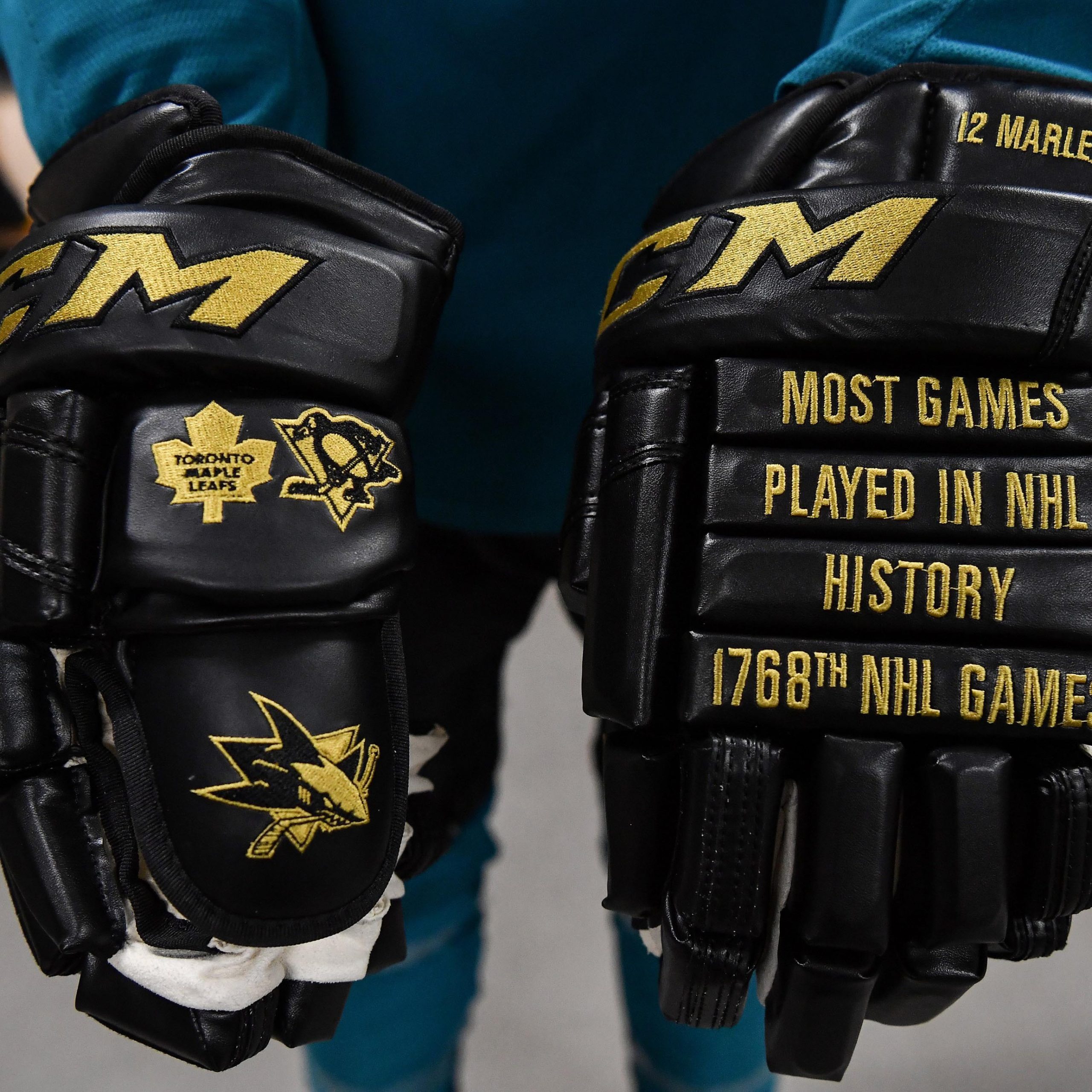 On 26 November 1961, when Gordie Howe broke the record in the number of NHL games played, nobody knew that the record will not be broken for the next 59 years. Several players, including Mark Messier, Jaromír Jágr or Ron Francis were really close to breaking it, but the record was finally surpassed last night when Patrick Marleau played his 1768th game and became the new all-time leader. Maybe it’s destiny, but when Sharks joined NHL, the first player to wear the turquoise jersey was Gordie Howe who helped introduce the new team to the public. And now Mr. Hockey is replaced by Mr. Shark. He debuted on 1 October 1997 in a Sharks-Oilers game and at the age of 18 and 16 days, he was the youngest player to ever play in the NHL in the last 75 seasons. Thanks to his talent, resilience, reliability and will, he’s missed only 31 matches in his entire career and currently he’s got a chain of 899 consecutive games. Although he’s never won Stanley Cup, his career’s been full of achievements – he’s a double Olympics gold medal winner, double World Champion, triple All-Stars game participant, he’s scored 566 NHL goals with 1196 points. Passion and love for hockey have been pushing Patrick forward, he’s not ready to end his career and he’d like to continue in the next season. A former team mate Mike Ricci jokingly said that Patrick could play until his 60s. A former team mate and friend Joe Thornton said that Patrick Marleau’s longevity is due to his excellent fitness and Jumbo was not afraid to say that physically, Patrick’s been always one of the top 3 players on the team. If Patrick continues his splendid career next year, he could break more records, for example for the number of consecutive games (current record-holder is Doug Jarvis with 964 games) or for most NHL regular season and playoff season games (current record-holder is Mark Messier with 1992 games, Marleau is currently at 1963). However, Patrick is not chasing records, he is fueled by his desire to win Stanley Cup. No matter what direction his career takes, Patrick will always be a legend, respected by his team mates and rivals. 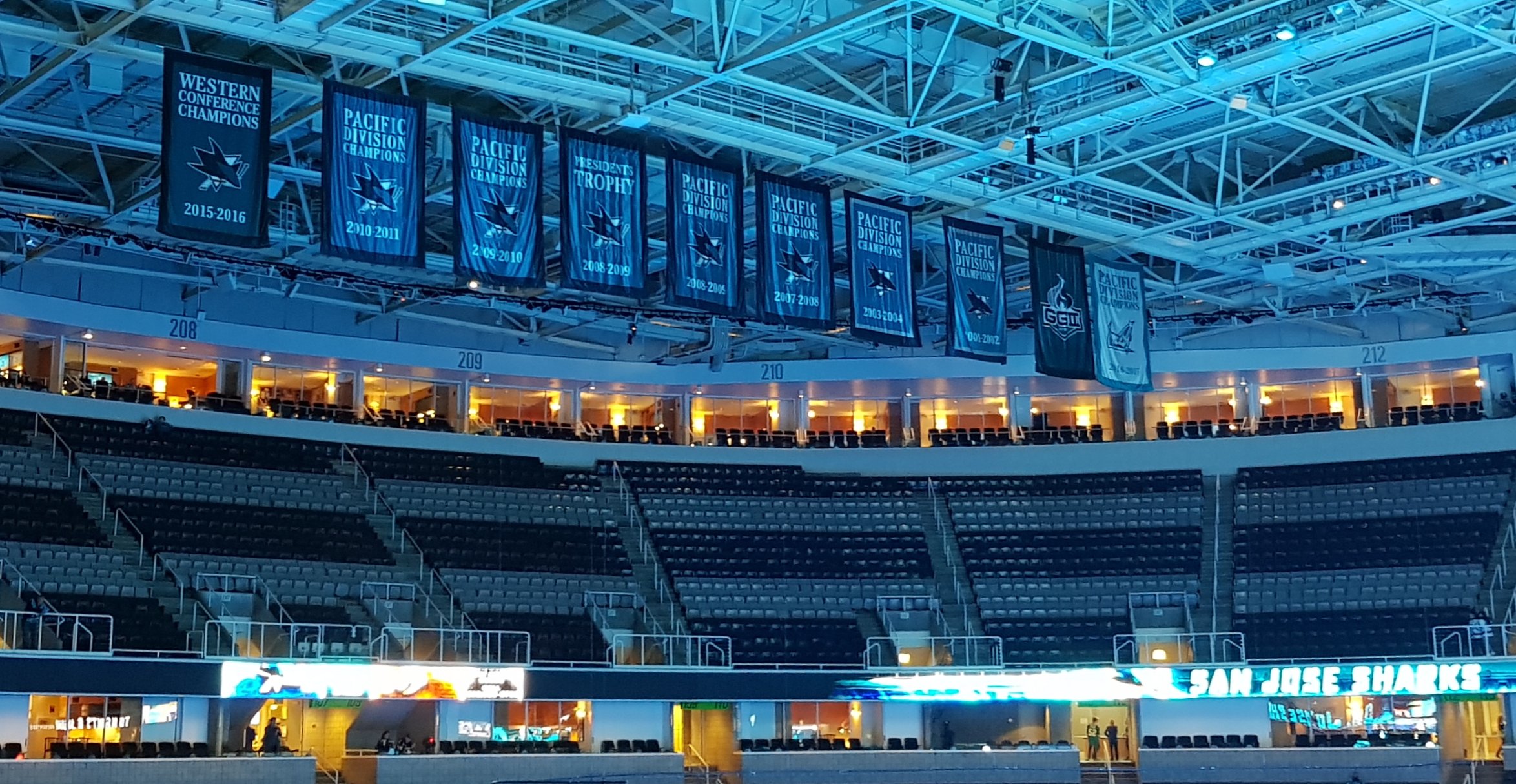 The 2020/21 season starts soon. Let’s have a look at what happened in the team last year and what we can look forward to in the new season. The 2019/20 season was affected by injuries, unstable performance and suspension due to global COVID-19 pandemic. For all fans, the last season was definitely a disappointment. We could even say that it was one of the worst seasons since 1996-97. The only positive thing were penalty kills, where Sharks were the best team in the league. Sharks finished the season as the 15th and last team in the Western Conference with 63 points in 70 games with a 182:226 score. Compared to the 2018-19 season, there was a drop in scored goals (2018-19 3.52 goals per game on average, 2019-20 2.6 goals per game). It is clear that Sharks didn’t cope well with the loss of Pavelski, Donskoi and Nyquist. The offensive was joined by 8 new players (Joel Kellman, Dylan Gambrell, Noah Gregor, Alexander True, Maxim Letunov, Lean Bergmann, Joachim Blichfeld, Danil Yurtaykin), but none of them managed to take a stable place in the Sharks team.

What does 2020/21 season hold for San Jose Sharks? Sharks enter the new season recovered from all injuries, relaxed after 10 months without hockey and hungry to demonstrate that the suspended 2019-20 season was just a glitch and not a true portrayal of the team’s power. Sharks still have a great potential to rank among the top teams in the regular season. Some players showed their skills on loans in Europe, so the team management has definitely many inputs to eliminate last season’s weaknesses and fine-tune the line-up for the next season to fight for the play-offs. The new season will also tell us how the new arrivals from Minnesota (Dubnyk, Donato) will fit in and whether speculations on Brent Burns’ departure to Seattle Kraken are true. It will also be interesting to watch Patrick Marleau’s efforts to dethrone Gordie Howe in the number of games played. Patrick only needs 45 games to do that. NHL experts say that it’s extremely difficult to predict the 2020/21 season. Anything can happen. We all wish only one thing: to see Stanley Cup hoisted above San Jose Sharks’ heads for the first time in the history of NHL.

Prague – the Czech Republic. On Saturday 1 August 2020, the first friendly floorball match between Czech and Slovak fans of San Jose Sharks and Vegas Golden Knights took place. This match was organized by facebook fans pages for slovak and czech region. Our boys created a team of four players from Slovakia and six from the Czech Republic. Our opponent was the first to score, but Sharks put in their best efforts and the first period finished with a draw 2:2. “The opponent is very well-prepared and doesn’t go easy on us. Vegas fans are young boys and some of our players could be their fathers”, said Petr Galíček, who was Sharks’ coach.

In the second period, both teams were equally strong, but we got in the lead. This didn’t last long and by the time the second period finished, the other team was in the lead again. After two periods, Vegas fans were winning 4:3. “It’s a good game and despite clear differences in age and fitness levels, we feel that we can beat Vegas. Some of us are low on energy, but we will fight until the last second,” said Juraj Mihálik, who scored a goal for us, after the first two periods.

At the start of the third period, our boys scored to 5:5. However, this period and the entire game was affected by a 2-minute penalty of one of our players. Our goalie and defence played fantastically and we didn’t let the opponent score. But then it was clear our players were tired and another Vegas’ goal was hanging in the air. Vegas scored a few minutes before the end of the game. Sharks couldn’t retaliate and Vegas added one more goal, with the final score 5:7. Our boys fought like lions, but it wasn’t enough to beat Vegas young boys. Despite defeat, we had a great day in a beautiful city. 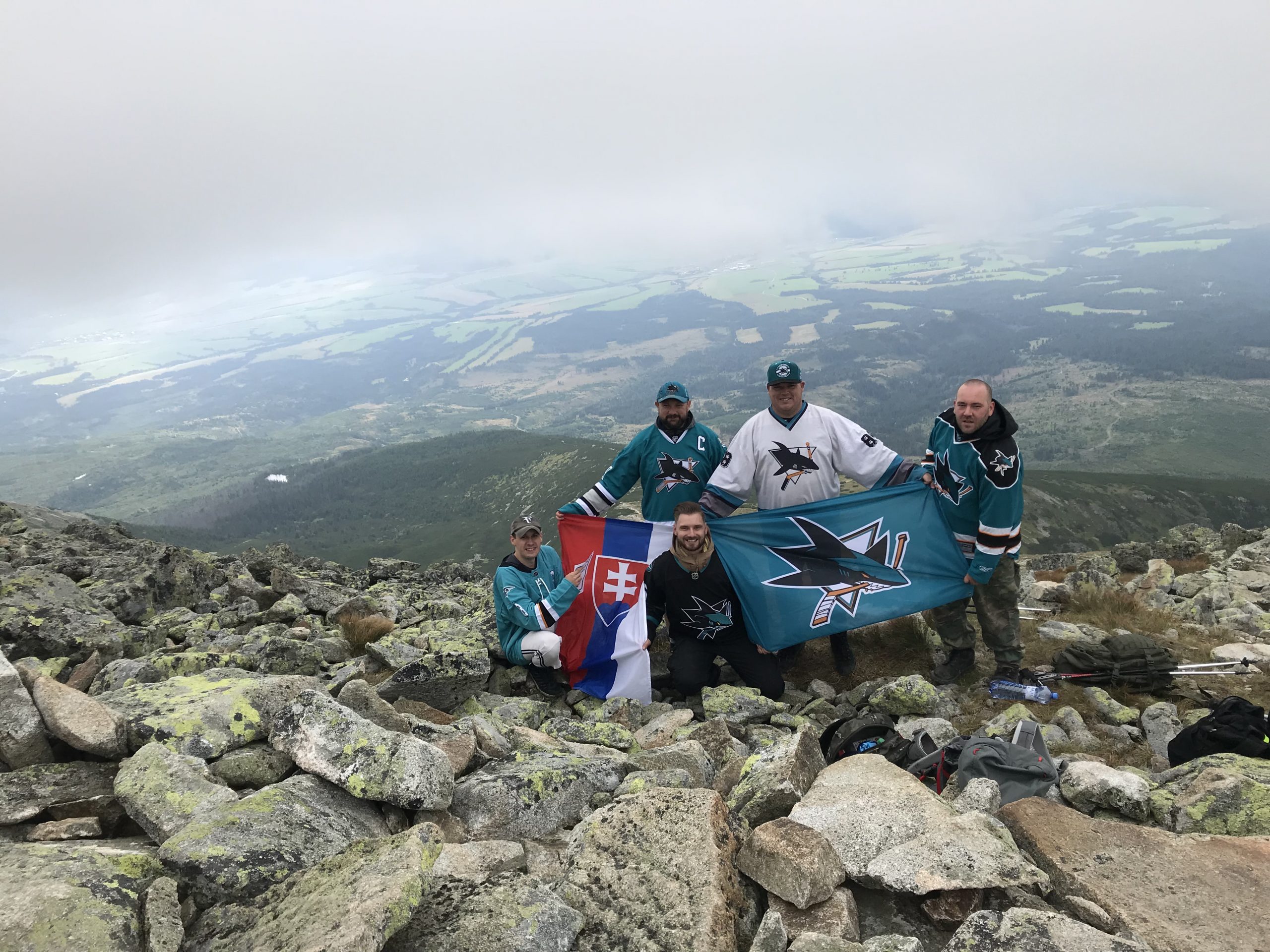 Five of our boys from Slovakia decided to climb the mountain to do something good for their health. The aim seemed simple – to climb Kriváň in San Jose Sharks jerseys. The day started very early, at 5 in the morning. Dominik, Ján, Juraj, Andrej and Pavol started their journey from Štrbské pleso lake. “We came from all parts of Slovakia. This is my fourth climb to Kriváň, but it’s the first time for some of the other boys,” said the most experienced crew member Pavol.

The weather changed a lot during the day. At the beginning, it was sunny with a temperature close to 30°C, but the last period was foggy with rain and snow. The boys struggled but their obligation to come back to their families was stronger. “A strong wind blew under the top and we had to stop. The weather was our enemy and in the middle of our climb, we heard that there was an injured hiker just under the top,” said one of the participants. Our boys put on their jerseys a few dozen metres under Kriváň’s top and of course they attracted other hikers’ attention. They congratulated them on their efforts and gladly helped them take pictures. We would like to thank Dominik, Ján, Juraj, Andrej and Pavol for their efforts to promote our team San Jose Sharks and as they said, they are ready to return to the High Tatras and conquer Kriváň.